Elections in Japan seem to be never ending. Being a foreigner, I of course cannot vote and usually just ignore the whole thing. However, the results of last weeks municipal elections caught my eye.

Two women with hearing-impairments won seats in the assembly. 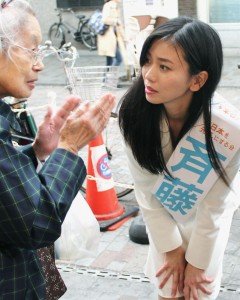 The reason that this likely made the news was that one of them is rather famous. Rie Saito lost her hearing when she was one years old due to a meningitis infection and went on to write an autobiography of her life as a night-club hostess in 2009 and gained wide acclaim (to read more about the Japanese phenomenon of “hostess clubs”, please read this article Host and Hostess Clubs). It was later made into a TV drama.

After quitting her job as a hostess, she became a lecturer and is raising her 4 year-old daughter as a single mother. The upcoming 2020 Olympics inspired her to run for the ward assembly as she wanted to “create a world where people with disabilities can actively be involved”. 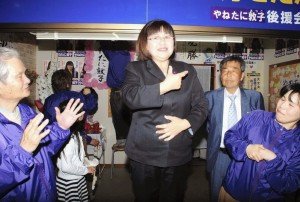 The other candidate, Atsuko Yanetani, was born without the ability to hear or speak. 20 years ago when the Great Hanshin Earthquake struck Kobe, she found it extremely difficult to get information on emergency aid at the evacuation shelter. This inspired her to become an instructor to train sign-language interpreters. While family members read her public speeches, Yanetani would sign, campaigning for “preparations for major disasters and improved evacuation centers for the disabled”.

In response to the two new candidates, the assembly is considering hiring a sign-language interpreter.

I’m very excited and hope these two can bring about positive changes as well as be encouragement for others with disabilities to step up and get involved.

[…] mentioned in a previous post, recently two women with hearing impairments won seats in the recent municipal elections. The city […]