One of the world’s most loved sports is taking its biggest stage in Japan this fall for the Rugby World Cup.  The event, which is the 3rd largest sporting event in the world, hosts competition between 20 countries and lasts for 6 weeks, culminating in the final match on November 2.  This year, my partner and I had the great pleasure of traveling from the US to both explore lovely Japan and attend 2 early round matches of the competition.

Purchasing tickets to the matches involved us entering a lottery early in the year.  Through this lottery we had the opportunity to purchase tickets for the Japan vs Russia match at Tokyo Stadium, which was also was the evening of the opening ceremony.  The second match we procured tickets for was Ireland vs Scotland at Nissan Stadium, also known as International Stadium Yokohama.  To our great surprise, we realized just before we arrived in Japan that when purchasing one wheelchair seat a companion seat is automatically provided.  Suddenly our 2 tickets for each match, turned into 4 and we could invite some new friends from Japan to join us!

Japan vs Russia at Tokyo Stadium

Getting to the stadium was relatively easy.  We took the Keio Line directly to the closest station, and although it was an extremely packed train, everyone was very kind and respectful.  It was a relatively short roll from the station to the stadium, where we met our companions at the designated gate and entered the stadium.  There was a ramp to go up to the main level, where we were met with very heavy crowds to navigate.  The ramp itself was long enough that the grade of the slope wasn’t too severe although any longer and some help might be needed.  Once we found our seats, we were pleasantly surprised with how much space we had.  We had a huge wheelchair designated section for the 2 of us and our companions had their own large section.  The bathrooms were large and easy to use.  There were 4 stalls in total for both men or women and never a line when I was needing to use them.  The biggest challenge was navigating the crowds to get to the bathroom and to access the food stands.  There were very few food stands open during the game and as a result the lines were so long that it took at least 45 minutes to get food.  In addition, the lines snaked up and down the steps making it impossible to wait in a wheelchair without some assistance or line cutting.  Getting out of the stadium and back to the city after the game ended up being easier than I had anticipated based on the number of people in attendance. 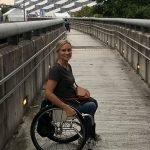 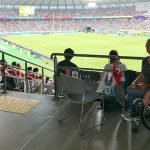 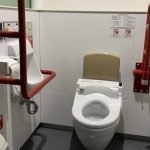 Ireland vs Scotland at Yokohama Stadium

Getting to Nissan Stadium in Yokohama was also relatively easy.  We took a shinkansen from Tokyo Station directly to Shin Yokohama Station and from there it was about a 10-minute roll through the town, which was crowded with spectators, but sidewalks were in good condition and easy to roll on.  After going through the gate and security, we had another long ramp to navigate, similar to the one at Tokyo Station, to get to our seats.  There were large crowds gathered just outside the stadium before the game, but the crowds inside the stadium seemed to be more spread out at this match and easier to get through.  The seating situation was a bit different at this stadium with the wheelchair and companion seats stacked together.  My partner had to sit behind me and our Japanese companions were next to us in the same configuration.  We were in the corner of the field and had a great view though!  Bathrooms and getting food were much easier at this stadium, in comparison to Tokyo Stadium.  The bathroom, a single, was quite large and located right near our seats.  There were also more food options available so much shorter, accessible lines. 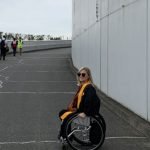 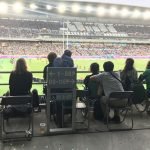 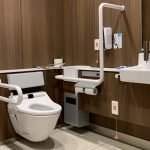 Overall, we had an AMAZING time in Japan and enjoyed attending the games and opening ceremony so much!!  The stadium staff were extremely kind and helpful and the excitement of the spectators was contagious!  We enjoyed meeting our new Japanese friends and of course, we can’t wait to return!!! 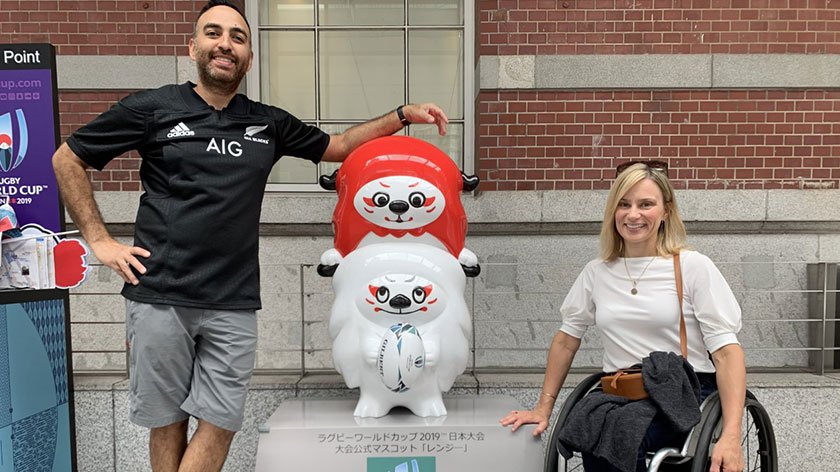 Thanks for the tips and the photos. Im about to head to Japan for the Rugby Grand final!.
Any other tips would be greatly appreciated

Hi Liz! First, I am so excited for you! You’re going to have such a great time at the game. Honestly I don’t have tons of advice. I believe that game is at Yokohama Stadium, which was pretty easy to navigate. I would just suggest allowing extra time for travel as I imagine the crowds will be pretty big. We traveled by train to both games and it took us longer than anticipated because of crowds. Everyone was very friendly though, which made it easy. Have so much fun and feel free to reach out if you have other questions.

Thanks Amy. I will let you know how we go!