Tips on Traveling to Japan with a Hearing Impairment

Garbled voices over loudspeakers, screens that don’t show last-minute schedule changes, crowded environments where it’s hard to see important – oftentimes, D/deaf and hearing-impaired persons are no strangers to travel complications, especially one what tend to be multi-step journeys like going to Japan. As organizations in Japan and elsewhere continue to try to make traveling more convenient for D/deaf and hearing-impaired persons, now might be a good time to take stock of what it is like to travel into Japan as a foreigner in the first place, and I’d like to use some of my own experiences traveling into and out of Japan as a hearing-impaired person to give some tips to help make your trip smoother.

As a reference, I am deaf in one ear and have moderate loss in the other, so my experiences are grounded in a transitory state between the hearing and Deaf worlds – appropriate enough for talking about traveling! My tips are also centered on traveling to and from the United States, so your mileage may vary.

So, without further ado – what I find most helpful when traveling to Japan:

Sign up for TSA precheck: If you’re eligible and have enough time, signing up for TSA precheck or a similar program can be a huge stress reliever. I’m generally able to skip large security lines in US airports and allowed to keep my shoes on and electronics inside my bags (no more straining to figure out what officers are saying). Your boarding pass will usually have the TSA precheck logo on it, which means all you have to is show the pass to airport employees and they’ll immediately understand – no verbal communication necessary. But be warned: sometimes TSA precheck services are temporarily closed, and I’ve had one occasion where the logo did not print on my pass, and running short on time, I had to make a tough call as to whether it would be faster to reprint the boarding pass and make sure the logo shows up or wait on the normal security line. You can get the application process started here: https://www.tsa.gov/precheck

If applicable, write down whatever kind of assistance you would like when you buy tickets: When I buy my tickets, I usually mention how I prefer instructions to be written (more on that later). Telling airport employees of what you want or need ahead of time can save surprise and confusion on the spot, although of course you don’t know what the outcome might be until you show up. Case in point: one time I was greeted by a wheelchair after depositing my bags, and was told I had to use it because I had marked myself as disabled on my ticket. I ended up in the wheelchair in both the American airport and the European one they used a stopover, but not in Japan when I finally arrived. Although it seemed like a waste, I was still happy to have the other kinds of assistance I enjoy to make traveling easier for me.

Know about airline/baggage policy ahead of time: In general, arming yourself with information on policies and procedures can save you time and difficulty in hearing verbal instructions or asking people to transcribe instructions (which, if they’re not expecting it, can take employees some time to process how and why!).

Use every means of communication available: That being said, asking employees to transcribe can be a huge help, especially in unexpected situations or more complicated instructions. For Japan travel especially, it might be helpful to get a printed sheet with Japanese phrases and their equivalents in your native language so you can point to them! Even Google Translate would do the job just fine for these purposes. 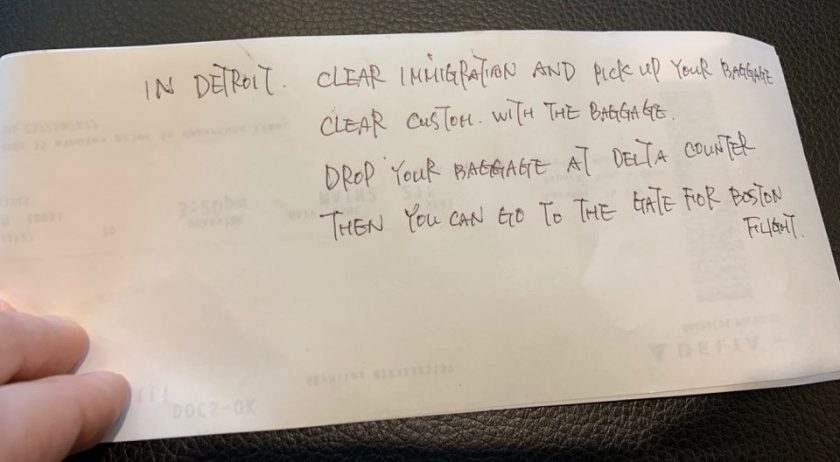 Written instructions in English I received from an airline employee in Narita International Terminal, where the ceilings are super high and the large crowds make it harder for me to carry on a verbal conversation. Having these transfer steps written out was a massive help.

Download airline apps: If you have a smartphone, the apps for your airline are generally going to be more quickly updated with relevant information for you than larger display screens in airports, and there’s the added bonus of being able to access them whenever you want. I personally don’t like apps crowding my phone so I tend to delete them when I’m done, although keeping them around could be a better time saver.

Be aware of the schedule inside the plane: For these long kinds of flights, I find it helpful to know, in written form, precisely when snacks, drinks, and food will be delivered. This way I can plan my sleeping schedule (or attempted sleeping schedule) around these deliveries so I won’t end up being too hungry or thirsty. As a general rule, snack deliveries tend to happen around a half hour to an hour after reaching stabilization in the air, with the first meal delivery around an hour after that, and final meal delivery around two hours before landing on the ground. If this doesn’t matter to you though, that’s great! One less thing to pay attention to. In terms of other in-flight adjustments, I generally try to point to things I want rather than say them verbally to reduce the chances of being asked more and more things out loud. If you want, you can ask flight attendants for written or verbal clarification on PA announcements. And if you don’t want to talk to anyone at all, large headphones will generally stop people to trying to talk to you, although if you combine them with closed eyes or eyemasks you could also run the risk of being skipped over for food deliveries. Finally, if you’re sensitive to air pressure or loud sound, custom molded earplugs could take some of the edge off, although “normal” earplugs would be better than nothing!

Know your plan for when you arrive in the Japan terminal: As a general principle, Japanese airports will have English signage displayed fairly prominently, but it can still be a little more challenging compared to navigating airports from your home country. Knowing the terminal layout and, more importantly, your plans for how to get to your destination beyond just the airport, can be extremely helpful – especially after a tiring journey. If you’re taking a highway bus somewhere, know where the counter(s) are and what you want, or if you’re taking a train, familiarize yourself with how to pay, the route you’re taking (including transfers), and what else you’ll need to make it smoothly (asking for help from train employees is great, but the noise levels of stations vary, and speaking through the glass windows at the help counters beside the ticket machines can be challenging).

And that’s all for now! Traveling to Japan is becoming easier and easier these days, so no matter what, you’ll be enjoying everything the country has to offer in no time. Good luck on the journey, and safe travels!

Frank Mondelli is a PhD Candidate at Stanford University’s Department of East Asian Languages and Cultures. He is currently a Fulbright Graduate Research Fellow working on his dissertation, which studies the technological and cultural history of assistive technologies for deafness in Japan. He earned his B.A. in Japanese and Linguistics from Swarthmore College in 2014 before studying endangered languages and electronic dictionaries in Okinawa, Japan as a Fulbright Fellow. Frank is involved in disability activism on Stanford’s campus as well as in Tokyo, where he is currently working with the Japanese Federation of the Deaf. You can read more at Frank’s website: frankmondelli.com