Although Sumo was officially recognized by the International Olympic Committee in 2018, no matches are scheduled to take places as part of the 2020 Games in Tokyo. Instead, fans are encouraged to travel to official tournaments, which take place six times a year. In this article, I take up the experience of viewing a sumo tournament and highlight how local food, history, and culture influence the way people perceive the games. My analysis focuses on the space of Ryōgoku, a bustling sumo town filled with small shops, stalls, and kiosks. I suggest that for many people, the act of watching sumo itself is less interesting than the opportunity to eat delicious Chankonabe, buy posters of their favorite athlete, and commiserate with their friends in the area near the stadium. I argue that to enjoy such sensory pleasures, sports enthusiasts must first be able to navigate narrow doorways and crowded corridors. As a person with a disability, such barriers present a challenge for me. However, they do not necessarily detract from my overall experience: in fact, barriers to entry often heighten my anticipation. By sharing my experience of overcoming barriers, I reveal how the process of traversing the sumo stadium can contribute to feelings of elation and enjoyment.

If I was going to make it to the sumo stadium, I first had to buy tickets. While I could have purchased tickets at a convenience store or picked them up at the venue on the day of the event, I decided to go through a courier service in Wilgo. My decision was guided by several factors:

I’m pleased to report that acquiring tickets through Wilgo was easy. After emailing the owner, I arranged to pick up my tickets outside my apartment upon my return to Japan. I was surprised by the size of Wilgo’s accessible vehicle, which seems like it could have accommodated my foreign powerchair. However, tempting as it was to accept a ride to the venue, I decided to test the subway. Using the Toei Oedo line, I traveled to Ryōgoku station, only to discover that the elevator was under construction! I had to take the train one stop back and walk for around ten minutes. It was a minor inconvenience for me but may have disrupted others.

Despite my detour, I reached the gate of the Ryōgoku Kokugikan Sumo Stadium relatively unscathed. As a wheelchair user, I was instructed to enter the facility using a side door to the left of the main entrance. Following a paved pathway, I made my way through crowds of people and entered the large building, only to confront a sea of bodies. The accessible entrance to the arena also happens to be the location where all of the stalls are that sell merchandise related to individual athletes, so I had to part the waves of tourists to find my way into the inner halls. As I did so, I couldn’t help but feel excited as the vendors around me made a big commotion about their wares. For the first time, it dawned on me: I was going to see sumo! Sure, I bought the tickets, but the experience of wading through crowds and passing under banners made the experience real for me.
After a brief stop at the bathroom, I drove my chair to the accessible box to which I’d been assigned. 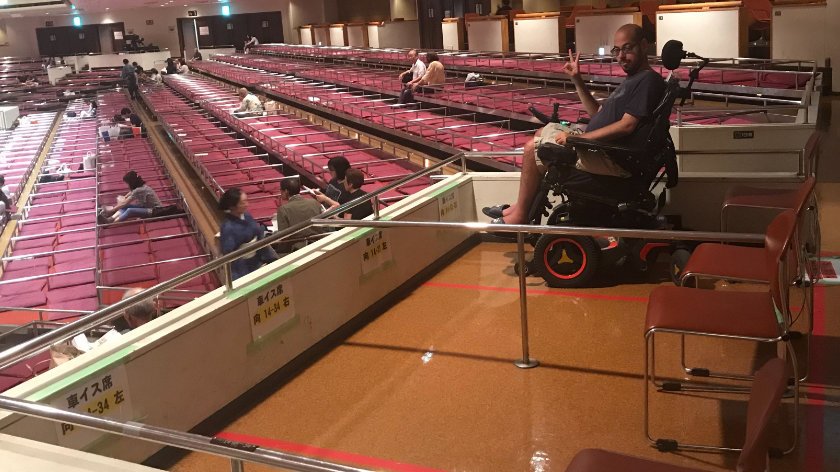 In all honesty, I found the actual sumo bouts quite boring. Contrary to whatever I thought I would feel upon entering the main stadium, the matches were short and the suspense fleeting. After watching around twenty fights in the space of forty-five minutes, I turned to my Japanese friend and asked if he was getting anything out of the tournament. To my surprise, he said “no, the fights don’t excite me.” So why were we at the stadium? I asked myself that question again and again over the course of two hours before my friend invited me to go grab lunch. As we left the arena, we made sure to get our hands stamped at the exit so we could re-enter without any problem. My friend and I agreed to go out for Chankonabe, a traditional stew popular around the stadium that is often served to sumo wrestlers and trainees. Finding a reasonably priced restaurant that would prepare the dish was already tough, not accounting for physical accessibility concerns. For around thirty minutes, we made a game out of finding a store that checked all of our boxes. After walking a short distance away from the stadium and traveling down a back alley, we found a place.

By the time that I entered the Chankonabe restaurant, I was already laughing at myself. What was I thinking coming to a sumo tournament when I wasn’t really a sports fan? I pondered the question as I dove face first into a bowl of hearty vegetable and meat stew. Paired with a few cups of tea, the meal completely revitalized me. I start to crack jokes and tease my friend across the table. “Are you up for another eight hours of wrestling matches?” I asked. “If only to watch your face the entire time,” he responded. It suddenly dawned on me: this was what sumo was about – at least for us. Sumo was about enjoying time with friends, having a good meal, and finding a common point for conversation (or, in our cases, commiseration). It didn’t matter if we were actually interested in the matches so much as the sights, sounds, and sensations surrounding them. 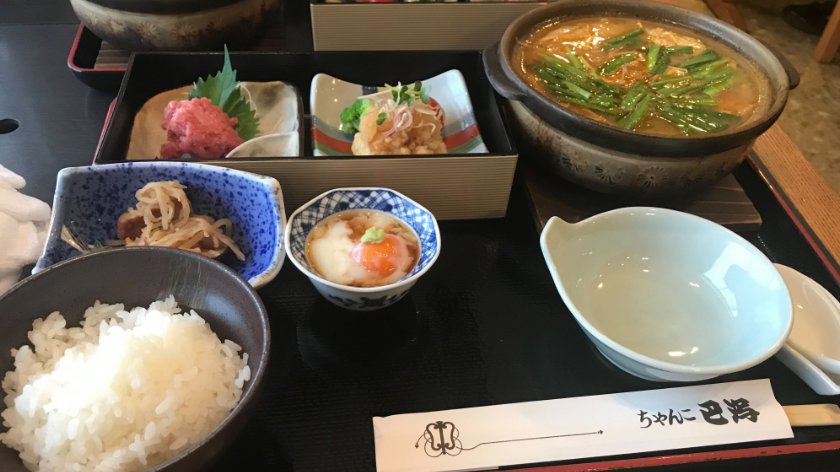 After sharing my insight with my friend, we decided to go back to the sumo ring: this time, with a different set of eyes. We returned to our seats and resumed watching the bouts but dropped all pretense of interest. Instead, we began to openly laugh at the spectacle playing out before us. “Oh man, did you see how fast he got thrown out of the ring?” I asked as a wrestler tripped and was knocked over. “Yeah, about as fast as you would be,” my friend quipped back. My friend ran out to grab us some snacks from a concession stand nearby, and before long we were both cackling and pushing each other to new levels of excitement. We began to enjoy the games in our own way.

If I learned anything from watching the Sumo tournament, it is that everyone enjoys sports differently. For me, the process of navigating the twists and turns of a crowded part of town, paired with transportation difficulties and other access issues, created an ironically enjoyable experience that I won’t soon forget. What will your experience of Sumo be like? You’ll have to go to find out!