Paralympics and the Wheelchair Nod – Reflecting on Tokyo

“Amazing, Japan was amazing.” I’ve said this over and over recently when asked by friends, neighbors, and colleagues about our family’s recent six-month sabbatical in Tokyo. My husband is a Japanese historian who was awarded a Fulbright grant to work on a book about the history of the Paralympic Movement in Japan. I’m a faculty librarian at a community college that generously grants sabbatical leave as well.

We’ve always known that we wanted to take our family to Japan to live, probably even before we had kids. In fact, I remember when we found out our second son Xander would be born with spina bifida we wondered if we would have to change those plans. In the end, we were able to make it work, and I think our experience was even richer and more complete because of the new perspectives we all gained by visiting Japan with a child using a wheelchair.

Dominick, 13, enrolled at the local public junior high school and Xander, 10, at the neighborhood elementary school. We were worried about it being more complicated for the school to admit Xander, a foreigner with no Japanese, who wears leg braces, has some medical concerns, and uses a wheelchair for distance. Instead, he ended up starting school before we could make all the arrangements for Dominick! Xander’s school welcomed him with open arms. The school is one of the oldest in Tokyo and did not have an elevator. Luckily Xander is able to use stairs as long as he goes slowly—a big enough challenge for an active ten-year-old boy. 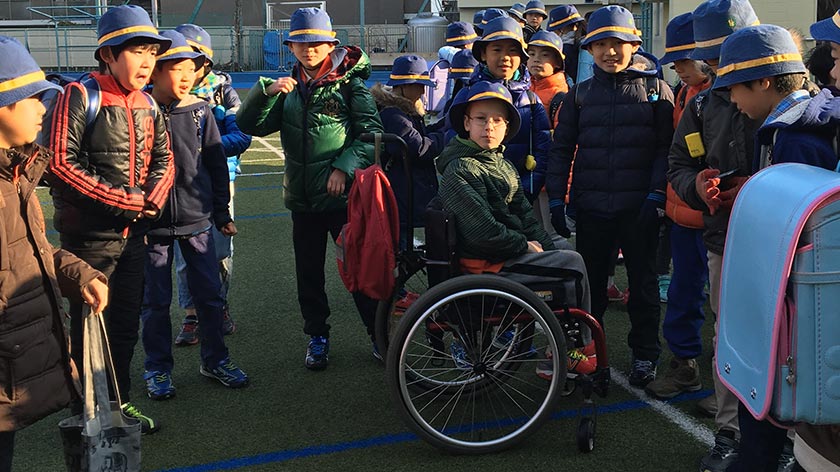 Xander became student number 40 in a third grade class in February. His teacher called frequently to ask questions and just check in at the beginning. I was constantly amazed at the level of caring and concern that he showed. When the class took a field trip to a local shrine the teacher carried Xander’s chair up the stairs. Xander’s classmates always seemed nice and helpful; he was quickly paired with a Korean student who spoke English, and the two became quick friends. I think the language barrier was the biggest distancing factor for the other students in his class. By the end of the six months, and after one-on-one Japanese lessons provided by the district, Xander’s language was at a level where he could more easily communicate with his classmates. I often think that if we had stayed longer he would have been able to make even more friends.

Transportation was the area where the wheelchair use had the biggest impact on us as a family. For the most part, the Tokyo subways and trains are incredible. We’ve traveled in New York and the subway system there was embarrassingly inaccessible. Initially, we didn’t realize that in Tokyo (and several of the other cities we visited in Japan) you can get personalized service with slopes meeting your train and station workers helping you navigate the train lines. Then one weekend, we went to Odaiba and a worker stopped and asked if we needed a slope. I thought maybe it had something to do with the futuristic Odaiba and surely was not the standard way that people in wheelchairs got around. I realize now that all of this information is readily shared in Accessible Japan—live and learn! Because Xander can do stairs and his chair is light enough for my husband to carry we would sometimes find ourselves at inaccessible stations and just walk up. In many ways it felt like cheating. And maybe because most of the stations had elevators, those times we couldn’t find the elevators or when they just didn’t exist it felt extra frustrating. I appreciate how accommodating most station workers were—but it was hard sometimes to ask for help, and then hard to be patient when chair lifts took forever, or we had to wait for multiple phone calls to be placed. Getting to St. Luke’s International Hospital was so complicated that we found it easier to get close and hail a cab. Our closest train only had an elevator on one side of the tracks so we would often ride past our station, transfer to the other side at an accessible station and ride back. 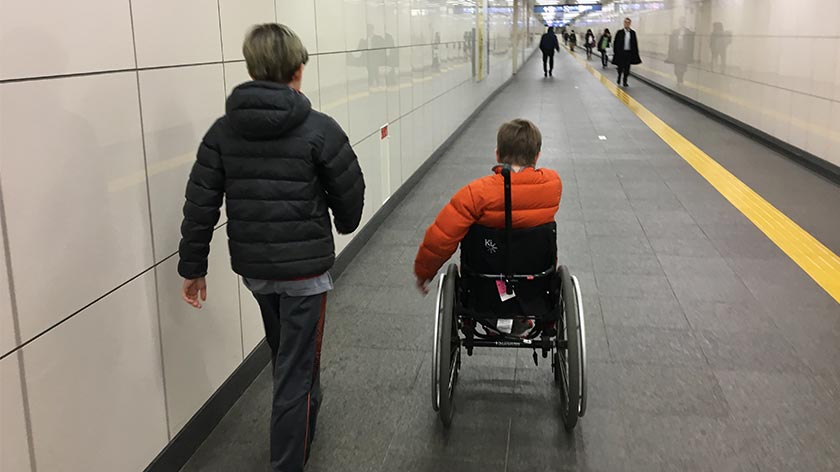 Because Xander was able to park his chair and walk up stairs to a restaurant, down a tiny stairwell to a rabbit café, and over uneven terrain at public parks, we had a much different experience than a full-time wheeler might. As a family we talked and thought a lot about accessibility, why it’s important, and how it’s challenging. I loved being in a city where it seems like many people were having those sorts of conversations. I’m really hopeful about the infrastructural changes happening in preparation for the Paralympics, as well as the education and discussions happening on the news, in the schools, and throughout the city. For the most part, everyone we encountered was kind and helpful when it came to Xander and the sometimes special accommodations he required (they let us keep his shoes on at a cat café). I hope we are all able to return again very soon.

I asked both boys to write a little about their experiences with an eye towards accessibility.

Here’s what Dominick had to say:

My time in Japan was overall very fun and interesting, however one main part was not, train stations. It amazed me how hard it was to find the elevator in some stations, with the Paralympics just around the corner. Some stations didn’t even have them. Luckily my brother could walk, so the stations without elevators were not too difficult, but for a person who couldn’t walk at all, some stations would be impossible. It was just amazing how different it was when I was on the trains without my brother: not trying to find an elevator, as stairs were often closer, easily available, and more well marked in English. I hope that when the Paralympics roll around that more stations are accessible.

In Japan I noticed that in some subway stations I got lots of people who could help me, but in others there were lots of stairs and almost nobody that helped. So in other words, sometimes getting around was harder than others. But one thing I thought wasn’t great was the uneven roads and sidewalks. Sometimes I would almost fall out of my chair when I would hit a curb or a bump. The same thing happens in Kalamazoo though.

At my school in Japan many students were eager to help me when the teacher asked them to grab my chair for an assembly or anything else. My favorite part of school in Japan was lunch and gym. I learned to enjoy lunch because I had to eat my lunch every day before I got to go outside for recess. Gym I basically got to run around and get all my energy out. Some of the things my teacher didn’t let me do because he didn’t really know what I could and couldn’t do. I kind of felt a little bit sad about kickball—he made me throw the ball instead of kick. I was a little sad because I knew I could kick, but my teacher didn’t know that and I couldn’t really talk to him and explain that I could do it.

Overall in Japan, I felt like I wasn’t really being discriminated against by other people just because I had a wheelchair. I hope in the next 20 years at least to go back and study more. I want to eventually become an English teacher in Japan.

Editor’s note: It should be pointed out that Xander is quite a trend-setter and is responsible for coming up with the “wheelchair nod” in Japan.  In his own words:

“In Japan I have made up this nod which is called the wheelchair nod. It’s a nod that I do to wheelchair users when we pass on the street. It’s basically a backwards nod.” 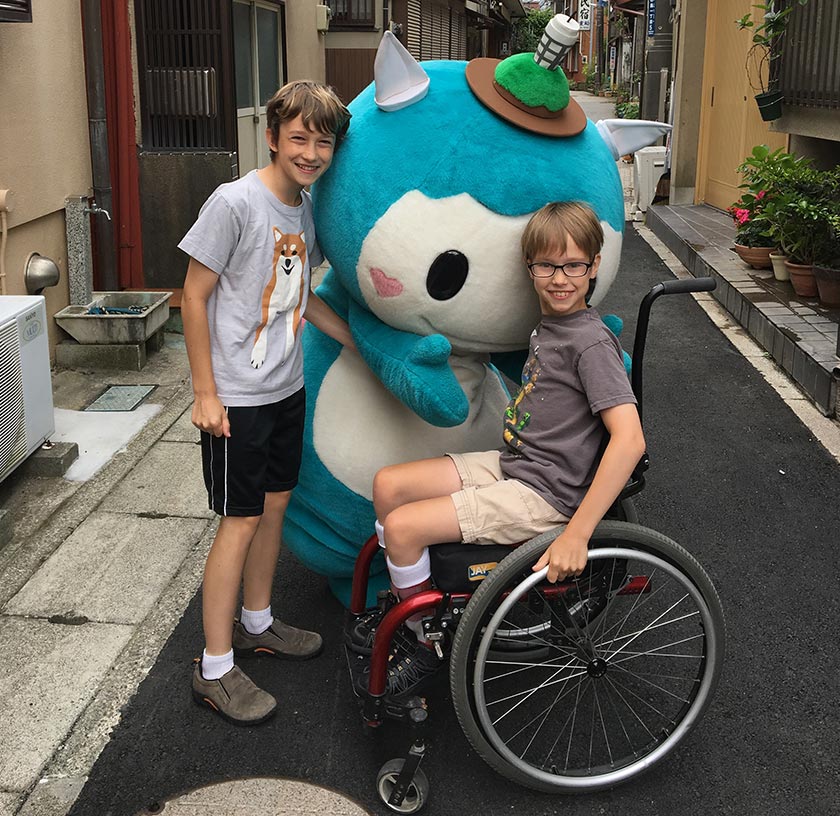