About Susie – I love travelling, seeing different places, different lifestyles, and different environments. Japan is the 78th country I’ve visited and I truly loved it! So beautiful and endlessly interesting. Fantastic resources like this are so useful for wheelchair users so I set up wheelchairworld.org to help wheelchair users find relevant useful resources and travel more easily. Check out the 1000s of reviews and resources for 80+ countries on wheelchairworld.org and follow @worldwheelchair on Twitter to get updates every time something new is added!

My next stop was the city of Nara where the key temples are handily located within the confines of one park. The deer are there too.  (PS – the deer are not remotely perturbed by wheelchairs and are more than happy to investigate you!) You have to do take a bus from the train station to the park, but the buses accessible and all of the temples that I visited were accessible with accessible toilets.

I then visited Iga Ueno – apparently the birthplace of Ninja – but it took almost 3 hours to get there from Kyoto station, and even though we were there when it was the Ninja Festival, it was rather a random affair in a park which was not really accessible because it was hilly and had no accessible toilet. The festival had demonstrations of ninja throwing stars in an outdoor auditorium which had no wheelchair space – believe me you did not want to be in the front row with all the children and only spitting distance from the ninjas and their stars!

The public bus was accessible. I saw a lot of private tour buses which did not immediately appear to be accessible, so check this if you are booking a tour.

Lake boat tour – the boat has accessible toilet, but I am not sure how you get on and off the boat since even though there was a ramp, I was immediately lifted onto the boat in my manual chair, so I was unable to see how difficult this would be normally. They were not able to lift the chair.

We originally booked a room at the hotel Manatei because all the regular booking sites said it was accessible. Unfortunately, it was not accessible, so we were moved to Hyatt Regency Hakone Resort and Spa which is definitely wheelchair accessible.

The adapted bathroom was fine, although it did not have a roll in shower, but it did have the shower curtain! There is level access to the reception area and a disabled toilet in the main area. 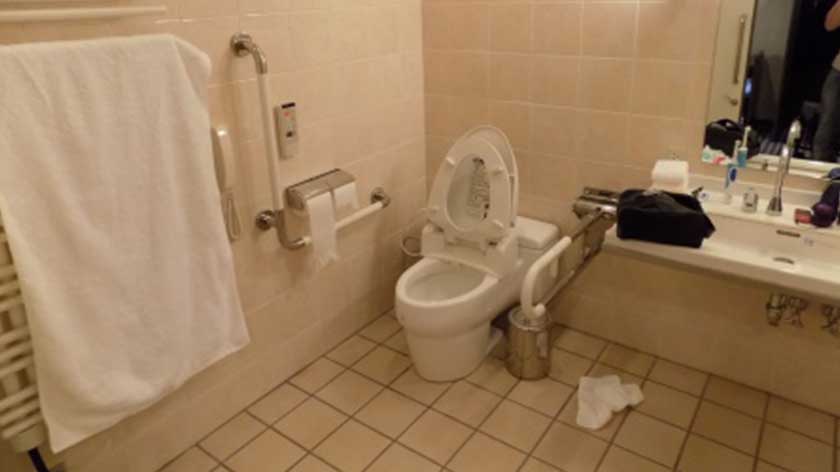 Unfortunately, you need to take a shuttle bus from the train station to the hotel and the minivan is not wheelchair adapted.

They have complimentary drinks (literally anything) between 4 and 7pm, which is great, but we were also hungry so we made the mistake of ordering something which we thought would be an awful lot bigger than it was when it came! Crazy expensive bar snacks!

The room was very small and the bathroom was equally small but adequate for one night with standard rails on the toilet. I did not use the shower or bath.

There was an accessible toilet in the general area.