About Susie – I love travelling, seeing different places, different lifestyles, and different environments. Japan is the 78th country I’ve visited and I truly loved it! So beautiful and endlessly interesting. Fantastic resources like this are so useful for wheelchair users so I set up wheelchairworld.org to help wheelchair users find relevant useful resources and travel more easily. Check out the 1000s of reviews and resources for 80+ countries on wheelchairworld.org and follow @worldwheelchair on Twitter to get updates every time something new is added!

Kyoto is an endlessly fascinating city. There are so many different parts to it that every time you turn a corner you will find yourself in a different element.

I felt that the train station staff are a lot more indifferent to wheelchair users than those in Tokyo – they needed to be prompted to assist rather than in Tokyo where they immediately assisted you. In Tokyo, they would always walk you to the elevator/way out, but in Kyoto, they often disappeared very quickly with a dismissive wave towards the direction in which you should go. However, all stations were accessible, there were dropped curbs everywhere and there was good level access to many restaurants.

Buses were accessible with a manual ramp at the back door and a wheelchair space created by tipping up a couple of chairs. After seeing a wheelchair waiting at the bus stop, the bus driver would rush around to get the ramp out and lift up the chairs. Sometimes they also had special blocks to put on your wheels to ensure your chair stayed steady when the bus moved suddenly. I found the bus drivers very efficient and helpful.

Nijo Castle was my first encounter with the dreaded gravel. I really didn’t realise how much of a problem it would be for a manual wheelchair. It is very difficult to wheel through. Once inside the compound there is a separate entry to the palace for wheelchairs and if possible you transfer into one of their indoor wheelchairs.

Philosophers walk – I read that there was a side street, which was better for wheelchair users, however, I would not call this a side street, it is a parallel path! When I visited, there were far more pedestrians on that path than on the actual Philosopher’s Walk pathway. There are temples with accessible bathrooms at both ends of the pathway.

Higashiyama District – This is an area with a lot of temples, not all the temples are accessible, but they are nice to look at from outside, and you will find some that are accessible and they have accessible bathrooms.

I stayed at the Kyoto Garden Palace Hotel which is very nice and it is right opposite the Imperial Palace. It is in the middle of 2 train stations and a good 5 minutes from either one. There are bus stops by the train stations. The food at the hotel was fine although the Western style breakfast came with a potato salad (?) And the bowl of fruit contained 4 very meagre slices of fruit. Not really an appetite quencher!

My room was massive, with 2 double beds and a sofa and plenty of extra space. As in the majority of Japanese bathrooms that I saw, the bathtub had no shower curtain! I found this rather problematic when using a shower chair in the bathtub. Other than this the bathroom was also enormous. 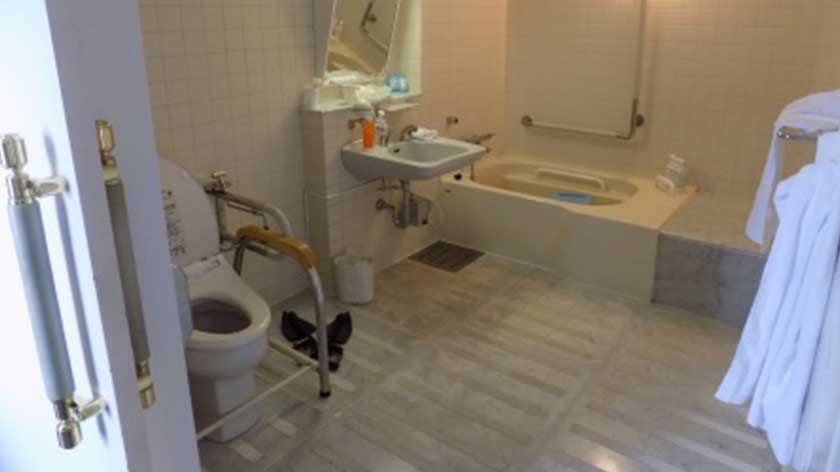 There is level access to the reception and the restaurants are also on this ground floor. There is an accessible toilet on the ground floor

I then stayed at Royal Oak Hotel Spa and Gardens near Kyoto so that I could still get into Kyoto and also visit to nearby Nara and Iga Ueno. I enjoyed both of these visits, although the park that we visited in Iga Ueno was not very accessible.

The adapted bathroom was quite bizarre – the bath tub seemed to slide out although I am not sure how this is useful. The toilet seat could be used as a shower chair and it had a very high back and a shower curtain rail around it between the bath and the toilet. There was an alternative lowered shower head and something that might have been some sort of shower stool.

It was not a particularly large room and the sink was outside of the bathroom and in the 1st section of the bedroom, which could be closed off.  Overall, it felt like there were adaptations that I have never seen before, but would be of valuable use to some people.

While the hotel inside is accessible, to get from the station to the hotel, you must use the shuttle bus, which is not accessible.  To enter it, you have to climb up 3 steps and it does not have space to accommodate a wheelchair. On arrival at the hotel, the shuttle bus parks by the main entrance and there is no dropped curb. I did not see any way to accommodate a wheelchair user who is unable to climb a couple of steps.

The main negative of this hotel was the final shuttle bus was at 9PM. This meant that the last train from Kyoto you could catch was around 845 PM (the journey takes 11 minutes) so you need to be at Kyoto station by 8:30 PM to ensure you have enough time to find somebody to get you a ramp for the train. This means you can never have any evening meal out. And the hotel restaurants all close at 9 PM, so if you are catching the last shuttle bus you need to eat beforehand! Also, if you go back to the hotel early so you can eat there, you may find that the restaurants do not have space because they are all reserved in advance! I did, however, one time eat in the hotel steak restaurant which had the Japanese chef preparing your food in front of you and it was really excellent.

After the quiet elegance of Japanese decoration, I found this hotel gaudy and tacky. For example in my room the curtains are one type of fabric which did not match the carpet at all, and the sofa was flowery. Some of the furniture was wicker, other elements were wood, and the bedding had nothing to do with anything! Normally I would not pay attention to this, but in place like Japan, it bore a very sharp contrast to other hotels.

I didn’t really like this hotel, but it was a lot cheaper than the other options in Kyoto.

Be sure to read part 2 here!