The Japanese Genkan and Accessibility

The genkan is a traditional entrance way into Japanese homes (and some businesses) and serves as an area to remove one’s shoes before entering. Even though it originates in the age of elevated-floor structures dating back over a thousand years, the custom has continued into the present even after the westernization of most buildings. This part of Japanese culture has some obvious implications for people with disabilities!

In addition to the steps found outside the door, houses and apartments have an additional step after entering the front door. This is the area where people will remove their shoes and change into slippers. So, what do people with disabilities do?

There are a number of options.

Those with the upper-body strength may have a separate “indoor wheelchair” that they transfer into and use around the house. If the wheelchair is light enough, it may get lifted up into the house after having the tires wiped clean. Since Japan is traditionally a culture where people sit on the floor, some people will even just leave their wheelchair outside and crawl when indoors.

There are apartments designed with accessibility in mind and have a flat genkan. The genkan is kept in principle by having different flooring – linoleum for “outside” and wooden flooring for “inside” with a simple metal strip separating the areas as seen below. 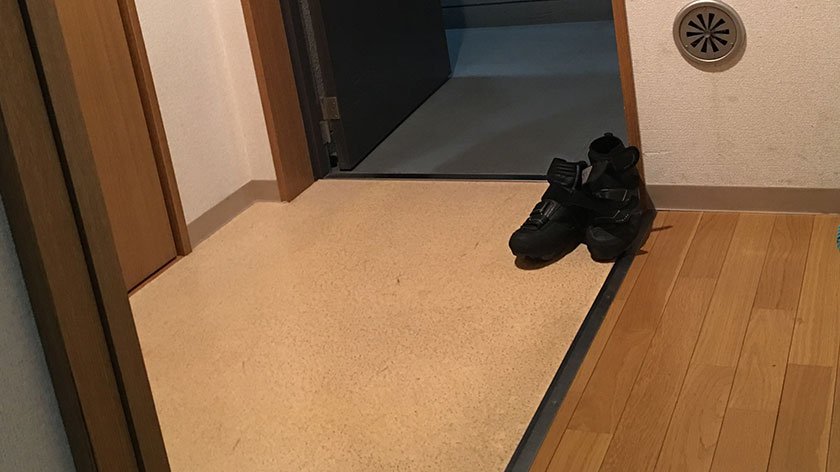 As Christina Hartmann mentioned in her blog post that those using canes may need to wipe their cane before entering a house.

Unfotunately, genkans are not limited to houses.

For people hoping to stay in a Japanese inn – or ryokan – it may be nearly impossible to enter the vast majority of inns due to genkans. This is also true for hot springs and public baths.

Most regular hotel rooms do not have genkans, but the non-accessible rooms at some hotels may have a step up into the washroom.

Where most travelers will run into a genkan though is unfortunately at restaurants and pubs. Most restaurants offering authentic Japanese cuisine will work hard at creating a traditional atmosphere – genkan and all. What is worse is that even in modern department stores and shopping malls some restaurants will intentionally add a step up into the restaurant for the sake of ambiance. While this may cut off access to many disabled visitors, some restaurants do have a portable ramp – so it is good to at least ask. Even if they don’t have a ramp, asking about a ramp may encourage the restaurant to buy one eventually. (You can see a restaurant genkan at the beginning of the following video.)

While Japanese culture offers many exciting things to explore, we at Accessible Japan hope that the genkan is one aspect of the culture that will fade away.