Engineering Employment: Robots and Remote Work for Persons with Disabilities at a Japanese Cafe

On November 26, the Nippon Foundation, together with Ory Laboratory and ANA Holdings, opened a café where customers could be served coffee by robots remotely piloted by persons with disabilities from their homes. The café represented an experiment in micro-tasking and telecommuting, one of many in recent years. Although it was only open for two weeks, it made its mark on media outlets (both local and global), receiving coverage from NHK, The Mainichi, The Japan Times, The BBC, The Daily Mail, and the New York Post, among many others. Luckily, I had a chance to visit and review the robot café before it closed its doors on December 7th. In the paragraphs that follow, I write about my experience and provide a brief analysis from my perspective as a wheelchair user and visiting researcher on accessibility at the University of Tokyo.

Upon entering the robot café, which was conveniently located on the ground floor of the Nippon Foundation’s central office building in Tokyo’s Minato Ward, I was struck by its remarkable ordinariness. All of the posters and promotional materials related to the robot servers and their remote pilots had been pushed aside to an exhibit opposite the café, leaving only a traditional space furnished with wooden tables, chairs, and cupboards. Although there was a bar, it was not gilded with gadgets and vomit-inducing photos of persons with disabilities happily enjoying their new occupation that might be called ‘inspiration porn’ by more cynical reviewers. Instead, it was adorned with glasses and mugs, and looked like any other bar at any other coffee shop that I might stumble into at 7AM with the hopes of finding my energy for the day.

The curated image of ordinariness at the café made me feel at home in more ways than one. Of course, I felt comfortable with the warm wooden surroundings and soft chestnut upholstery. But I also felt safe knowing that the pop-up café was not explicitly pandering to an audience who wanted to see how ‘pitiful’ persons with disabilities (like myself) with limited mobility could live meaningful lives in a post-capitalist wasteland like Japan. Indeed, it seemed to me like the creators of the café deliberately crafted an environment in which customers’ focus could shift to the robot server, and therefore the employment possibilities for persons with disabilities. Their café was one of opportunity for persons with disabilities, rather than satisfaction for those around them.  I appreciated that very much and took note as I contemplated my order.

Before I describe the ordering process at the café and my thoughts and feelings about it, I have a confession to make. For months now, I’ve read reports about the rise of micro-tasking and telecommuting as potential solutions to Japan’s employment problems for persons with disabilities in articles by The Japan Times, The Asahi Shinbun, and other media outlets. Indeed, such articles have only become more commonplace as Japan’s disability employment problems are brought to the fore by an ongoing government scandal involving the inflation of employment statistics over the last forty years. Some articles have described persons with disabilities as an ‘untapped labor force’ that can assist short-handed companies by working from home. Others have focused on the novel and unique ways that persons with disabilities are mobilizing telecommuting technologies to achieve their goals. For instance, we might consider an article about Masatane Muto, a man with ALS who uses an avatar robot to work as a DJ at venues across the world. Now, I expected that my encounter with the robot server would affect me the same way that reading such articles did. In other words, I would recognize the potential, nod in approval, and move on with my day, plus one cup of coffee. Suffice it to say that I was completely wrong.

As soon the robot server approached me to take my order, I was shocked to hear a human on the other end. The avatar robot was equipped with a microphone, and suddenly I was immersed in a human encounter. Gone was the uncanny valley and divide of cold data on the internet. Instead, I was faced with a living, breathing person. It was like talking with my friends and family on Skype, or via my cell phone. After a moment of hesitation, I told the server that I wanted a café mocha, and before long he wheeled to the other side of the room and returned with a cup on a tray. I took the cup and thanked him, and he quickly went off to help someone else. That was it. No fanfare, no fuss, no celebration of technology. Just a man ordering a cup of coffee, and a man delivering it via a robot. It felt natural, and I was happy with that.

After paying and leaving the café, I headed over to the promotional booth to take a look at the flyers and advertising materials for the robots. I was pleasantly surprised to find that they had a demonstration unit where guests could pilot the robot and learn about its functions. Using a digital tablet, I controlled the robot’s arms and face, and I also made it say a number of pre-recorded phrases and live-streamed my voice. I saw what the robot saw through a built-in webcam on its forehead and governed its motion via a series of fields on the bottom of the screen. I was really impressed with the construction of the software interface and could easily imagine it being implemented in places across the world. To think, a society where persons with disabilities from Japan could work in the United States and vice-versa, all without leaving their homes. How exciting!

My experience at the robot café was truly remarkable, perhaps because of its striking ordinariness. I hope that the concept introduced by the Nippon Foundation, Ory Laboratory, and ANA Holdings continues to take root, and that such technologies spread across the globe. For now, I think we’re off to a good start, and so long as we make sure to keep persons with disabilities looped in to the design process, I’m sure we’ll accomplish some truly great things. 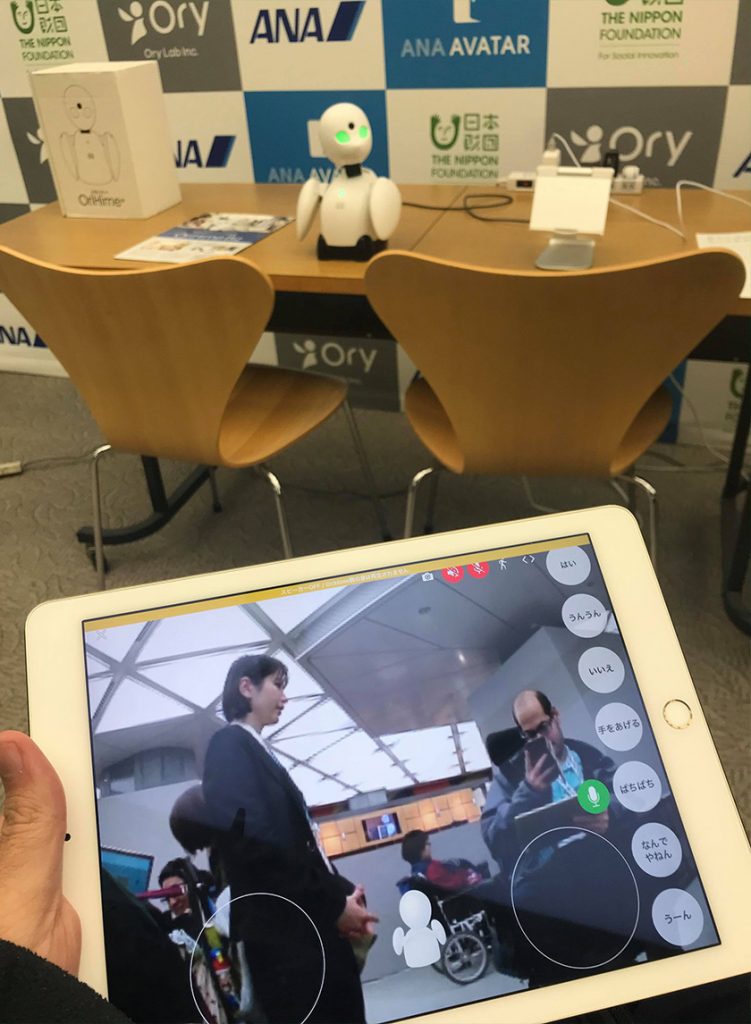