By Mizuki Hsu
of Moon Rider 7

My name is Mizuki Hsu. I am a Japanese disability advocate in a wheelchair. From October 2015, I worked with the Burton Blatt Institute at Syracuse University in New York, U.S. to research employment of people with disabilities. I visited 10 states, 20 cities and interviewed over 100 people who work for the U.S. government, companies and disability communities across the country. It was an amazing year for me, and all those experiences made me a stronger disability advocate.

In the middle of September in 2016, I finished my research in the States and came back to my home country, Japan. The following week was very special. I was invited to a reception for Senator Tomas Harkin at the U.S. ambassador’s residence in Tokyo. Senator Thomas Harkin is one of the important people that pushed for the ADA (The Americans with Disabilities Act) to be signed into law and has put a strong effort into eliminating discrimination against people with disabilities for over 30 years.

The ambassador’s residence was quite full with approximately 100 guests who are disability advocates, or who are working for the Japanese disabled community or the government. I even found Nobuyuki Tsujii who is a very famous Japanese blind pianist, as well as a family of victim from the Sagamihara stabbings that happened in July. 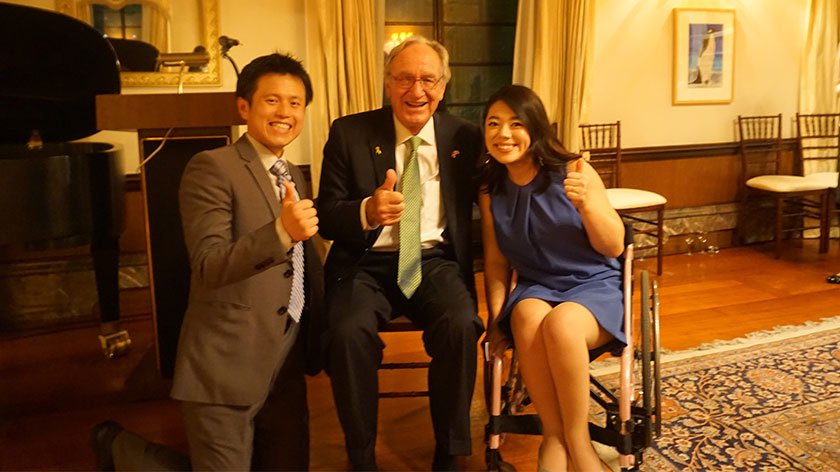 Senator Tomas Harkin talked to each guest very politely and kindly. I was not an exception. He welcomed me with his warm smile. After I shared my experiences and findings though my research, I asked “What is your ideal society for people with disabilities?”, which I always asked people when I interviewed them in the U.S.

In terms of awareness for people with disabilities and accessibility, Japan is still way behind the U.S., though Japan has implemented new laws and regulations as a country which ratified the Convention on the Rights of Persons with Disabilities (CRPD). I believe more people with disabilities need to take the initiative and continue advocacy works in Japan. Meeting Senator Thomas Harkin empowered me to take action to make a more inclusive society for everyone in this world.

Mizuki Hsu lost her ability to walk when she was 2 and a half years old and started using wheelchair when she turned 7 years old. She was born and raised in Kyoto, Japan. Despite her mobility impairment, she went to The University of Wisconsin River Falls in the U.S and received her B.S. in Communication Studies and International Studies. After returning to Japan, she worked with three companies in Tokyo and volunteered at a non-profit which publishes a magazine for women with disabilities.

She spent the past year as a Visiting Fellow at Burton Blatt Institute (BBI) researching topics related to disabilities, including employment of people with disabilities.